75% Off Sale on Paint By Number Kits!

Adventures into the best calligraphy pens

The best calligraphy pens will be smooth and easily controlled when applied to your stationary!

Finding the best calligraphy pens can be a very challenging task and great care should be taken before purchasing just any old kit. I tried to review some of the more affordable sets even though there are more high end products out there for those who know what they are looking for. This review only covers the classic dip style pens

The Speedball brand has been around for generations and is well known for their calligraphy pens. I thought this was a good choice as the price is right and all the tools needed for getting started are there.

Hours of time has been spent researching each of these calligraphy pen sets plus my own experience to bring you the most accurate information. Let my hard work help you find that perfect calligraphy pen.

This is a 19 piece set and comes with a wood and glass nib holder, 12 nibs and 5 different colored inks. Black, blue, indigo, red and green. Classic dip pens.

Overall this seems like a best choice for practicing calligraphy. Care must be taken when removing caps from ink bottles. Had lots of positive reviews and satisfied customers. More research may be needed to make a buying decision. This is a family owned brand and pride is taken in customer care.

Nice packaging makes this the best calligraphy pen for gifting. Comes with 1 gold nib and 10 standard nibs. This set also has a golden (not real gold) pen holder.

After much research this pen set ranks pretty high with a fair amount of positive reviews.The golden nib seems to be the better nib to use and it also holds more ink so the user can write longer without dipping in ink.

This set comes with everything needed to get started making this the best calligraphy pen for beginners. Sporting 2 Calligraphy pens, 2 inks, 5 different nibs, a tracing pad, guide booklet, a downloadable workbook and a nice magnetic box for storage and display.

Even though this set is for those interested in getting started in calligraphy it is still of decent quality. I thought the oblique calligraphy pen was a nice touch.

The compact box with elastic bands to hold the parts and accessories make this the best portable calligraphy pen. Displays very nicely when set up on desk. Comes with 1 bottle of non toxic ink, 2 different nibs, spiral glass pen and a brass base that holds the pen and ink.

Great for practicing lettering and for drawing with just the 2 nibs provided. Appears to be of higher quality and other larger sets with inks are also available.

This brand is well known among professional artists and has been around for a long time which makes this the best calligraphy pen for artist’s. Contains 4 broad nibs, 4 flexible nibs, a classic pen holder, an oblique pen holder, a crow quill pen holder, 3 inks (black, red and blue), pen cleaner textbook and nice snap closing box for transporting.

Speedball calligraphy pens have been around for a while. I learned some lettering styles when I was in Art school using this brand when I was a kid. Possibly one of the best calligraphy tools out there making this a sound choice.

Calligraphy is the art of letter design. Other than staying within general parameters of shape and design there are no boundaries in lettering or styles so long as it is readable. One of the oldest known forms of calligraphy started in ancient Rome which is what the english alphabet is based off of today.

There are some important things to keep in mind when looking for the right pen to purchase.

When beginning calligraphy you need to have a clear path for a particular style of lettering because of the wide variety of accessories. Different nibs and pens are used in different styles of lettering. So choose the type of nibs for your lettering style. It is easier to learn one style at a time and will also save you some money when first starting out.

When designing letters a pencil is used for guidelines before the ink is applied and then erased after the ink is applied. Each letter is composed of strokes in a specific order and variable pressures giving what seems to be endless variations to each individual style of letter.

This style of lettering is done with a single stroke with no line variations or thickness differences making this type of letter easier for the beginner. This lettering is popular in newspaper headlines and posters. Excellent choice when first starting in letter design.

Being somewhat more complicated and decorative this style is one that is not boring to learn. An upstroke will give you a thinner line and a down stroke gives a thicker line. Adding in the serif (finishing touches) to the tops and bottoms of the letters gives these letters an elegant touch. Most Roman variations use serifs but not all.

When writing, these letters tend to lean a little creating the Italic lettering style. There is not a set rule as to how far the letters slope over. Very similar to the Gothic letter, having a single weighted stroke thus making it a good choice for beginners. Used to give emphasis to words but sparingly due to Italics being difficult for the eye to read comfortably.

Being drawn with more precision and accuracy makes this style more difficult to draw. Slope of the letters are drawn at a consistent angle and flow smoothly from one letter to the next. The thicker lines run gracefully into the thinner lines to form curves.

This type of letter design should be done after learning the previous three styles mentioned above. Only after hours of practice can you start to manipulate each style into your own signature style which is the art of freestyle calligraphy. There are endless possibilities to giving letters a personality of their own. The perfect example of this is the signature. Just like fingerprints a good calligrapher can be known by their own personalized style of writing.

Broad Nibs – These types of nibs are great for bold and single stroke techniques. There are varying sizes of this broader type of nib helping with broader strokes with smaller letters. Best for the Gothic style of lettering.

Fine Nibs – This style of nib has quite a large amount of various sizes allowing the artist to draw extremely fine lines whether lettering or drawing.

Flexible Nibs – I consider this the specialty nib of choice. This one allows for the most freedom once learned. Best suited for the Roman lettering style. Practice using upstrokes and down strokes while adjusting pen pressure to create thick and thin lines that flow nice and smooth one to the other.

I chose all dip nib calligraphy pens to review because this is the best style of pen for classic lettering design. The brush pens can be a very good choice also when learning calligraphy.

Calligraphy brushes seem to be the most expensive and are for the more professional artist. Very hard to find decent feedback on these types of lettering tools.
Experience and knowledge of the Speedball brand makes it my top pick and best all around calligraphy pen for beginners to professionals. Thanks for reading and as always I hope this information has helped to guide you to the calligraphy pen best suited to your specific needs. 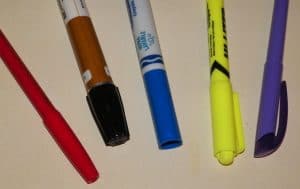 6 Best Markers For Arts and Crafts

Analyzing some of the best markers for arts and crafts to show a variety of different applications used on the market today!

Some of the best watercolor pencils

One of the best watercolor pencil techniques is to use them with watercolor paint for the finer details! 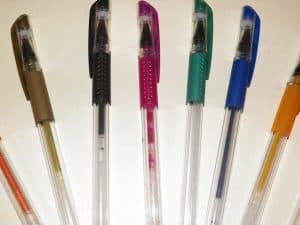 Research shows that the best gel pens are highly popular for adult coloring books according to many online reviews!

As an Amazon Associate I earn from qualifying purchases.